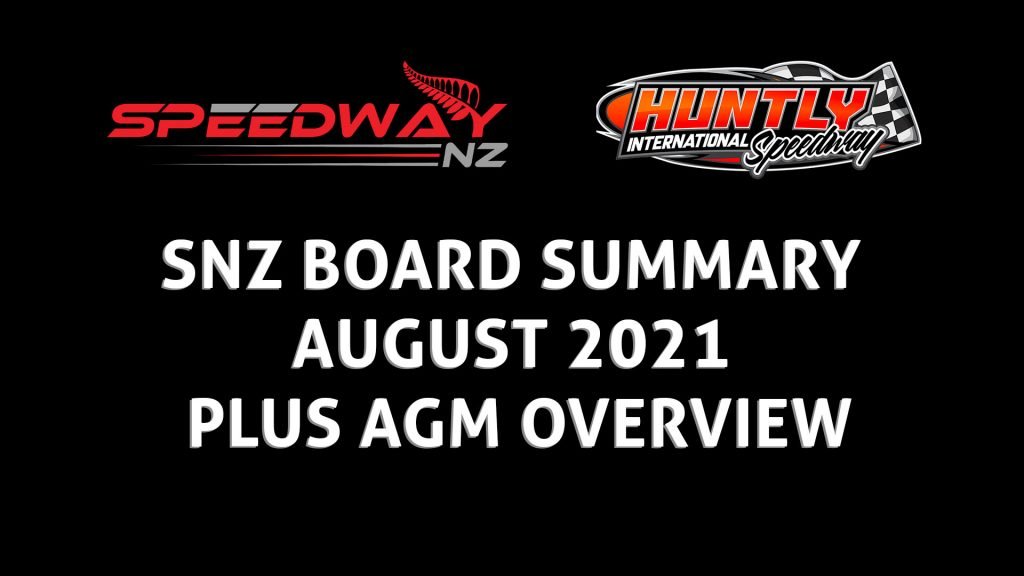 The 2021 Speedway NZ Annual General Meeting held in Christchurch on 9/10th July saw all 23 member tracks represented. Both a promoter and competitor delegate from each venue voted on 132 proposed rule changes submitted by stakeholders in the sport, covering the organisations Constitution, General, Safety, and Racing Rules.

Some key highlights of the rule changes made over the weekend:

Section R10 & R11 rules (Open Wheel and Saloon racing rules) were subject to alignment. For example, competitors in Section R11 (Saloon classes) will now be able to serve a penalty during a race, a rule that has been in Section R10 (Open Wheel) for the past two seasons.

A rewrite of Section S (Safety Rules) saw some helmet standards change across all codes, and Modified Competitors now require a Head & Neck Device in alignment with Open Wheel competitors.

Ministocks now have their own set of racing rules, which include a provision for rolling or clutch starts and either red or yellow light race suspension. Contact has moved to deliberate only, with no provision for a competitor to be penalised for making accidental contact.

Two new D Window wheels have been approved for use in the Stockcar class. The Wheels are supplied by Performance Wheels www.performancewheels.co.nz and full specs can be found on the Speedway NZ website under the Technical Tab. Due to the number of approved D Window wheels, the Speedway NZ Board have elected not to approve any more at this time to avoid confusion in the field for volunteers.

The Speedway NZ Board have been investigating various spring retaining options for the Stockcar and Superstock class following repeat failures, with one resulting in a serious crowd strike. The Technical Advisory Panel have provided recommendations, with the Board now pursuing those options. It is predicted that upon final design sign off that there will be a lead in period of 3months for a control component to avoid further issues.

MYLAPS ROLLOUT At the 2021 AGM, track delegates discussed ongoing lapscoring issues around the country and voted unanimously for the sport to move to MyLaps. The delegates motion will see all Speedway NZ tracks move across to the MyLaps system by the 2022/23 race season. Work is underway on the rollout and training schedule for lapscoring operators. Updates on the transition will be communicated in due course.

Huntly Speedway will be running the Dorian Lap Scoring System for the 2021/2022 Race Season.